Is covid-19 the first time we’ve ever tracked cases and deaths for a specific illness? It seems all data for H1N1 is estimated rather than based on specific testing data.

I thought it was interesting to learn that H1N1 did not affect those over the age of 65 as much as younger folks, because it is thought that many over that age had a prior exposure to an H1N1 strain long ago, that younger folks had not.

Also, I found some death rates by age charts for regular seasonal flu viruses that looked awfully similar to covid-19.

The estimated number of flu & pneumonia deaths going back to about year 2000 is around 60,000 and there was no spike in this in 2009 with H1N1. I expected there to be a spike that wasn’t there.

But, one of the most interesting things I found was the information in the chart below for flu and pneumonia deaths per 100,000 population going back, for select years, to 1950.

What’s striking is how high the flu and pneumonia death rates were as recently as the 1990s.

I wonder why? Have flu vaccines improved or become more widely adopted since the 2000s? Maybe. I don’t recall flu vaccines being as widely available until then.

Do those years provide better baselines for understanding what’s happening now because it better represents with viruses that have little or less prior immunity? 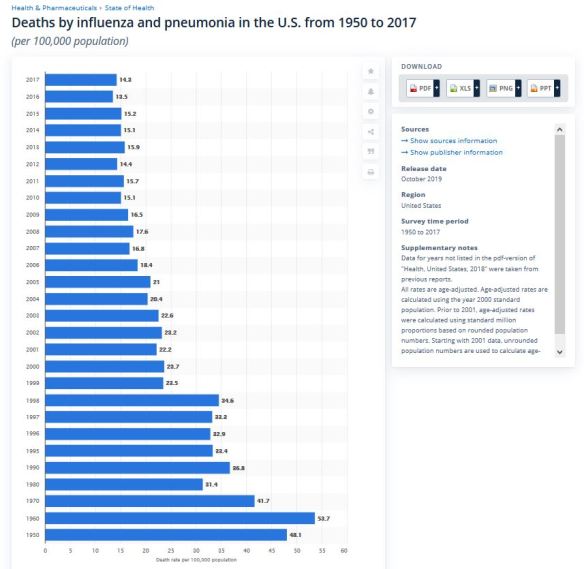 But…CDC estimates for flu deaths is always a small fraction, because many flu deaths are categorized as pneumonia because that’s eventually what causes the death.

Also, since the H1N1 was only estimated and not specifically tracked like covid-19, I felt the direct comparison is a bit apples-and-oranges.

Even with those caveats, I told him it’s easy to draw conclusion that covid-19 is, so far, worse, than H1N1, and outside the upper bound of the for typical seasonal cold and flu, with time to go.