We won’t find out, until someone tries it.

Governors are banding together, because none of them have the cajones to do it on their own. If it doesn’t work, they want to be able to pass the buck to the consortium.

As far as I know, anybody that tells us what’s going to happen after opening up is guessing, just like I’m about to do.

This is just a possibility

I made the chart below, using data from the COVID tracking site.

It plots the daily (rather than cumulative) number of tests given in the U.S. (blue line) and the daily number of COVID-19 positives.

The vertical axis is a log scale to make it easier to compare the trends of the two numbers.

One thing that I’ve considered a possibility for awhile is that we mistook the steep growth in the red trend line from March 1 to about March 20 as the spread rate of the virus.

From the chart, it’s apparent that it follows the growth in testing. When testing levels off, so do the number of new cases found each day.

Now, I could be wrong about that. The modelers may had somehow taken into account that the growth in testing was driving that curve, or used an entirely different method to estimate the spread of the virus.

Early, testing was restricted to high risk cases with clear symptoms. I would expect a higher positive rate in that period, and that’s what we see.

Here’s the trend in that: 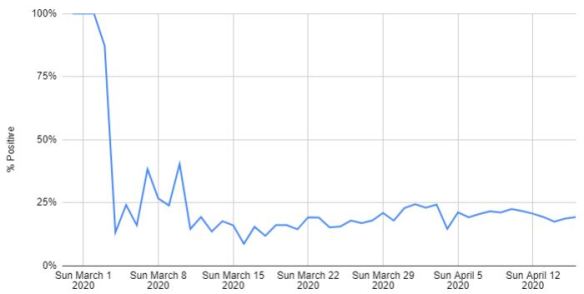 That settled in at around March 20 at 20% and has stayed there. That was just as lockdowns were getting started and testing was getting close to leveling off.

What does this tell me?

I think it’s possible that the virus was spreading slower than we thought before we locked down. In some areas, that have lots of closed, shared spaces with elevators and mass transit, maybe it was spreading faster.

And, maybe that means we won’t see explosive growth when we reopen. And, we might not be up against as much of a tsunami in dense areas if we practice some basic precautions, like wearing masks, washing hands, disinfecting surfaces, etc.

That’s just a guess. I could be wrong.

Another WAG I’ll make from this data, which I’ve stated before, is that the virus might be rolling through the population in 5-10% chunks. That’s based on assuming the 20% positive test rate is double or a little more the rate of COVID in the total population.

If it’s been here since January and took a bit to get to the first 5%, we may be in the 4th to 6th wave of that, which would put us somewhere between 20-40% of the population that has had it.

Something that makes me doubt my guesses is why would we have had the peaks if this thing was spreading steadily?

Though there are a few potential contributors that fit with the guesses above.

First, we brought panicked attention to it. We shined a spotlight on something that could have been already happening just as our capability to identify it (testing) was growing fast, which made it look like it was growing fast.

Two, that panicked attention may have caused more spread as people went to hospitals ill-equipped to keep infected patients from spreading the virus to workers, patients and other visitors.

Third, my ‘shutdowns may have concentrated more cases into a few days‘ theory could also contribute.

The first contributor would not have caused more cases, but as we shone the spotlight on the rapidly increasing cases (red line in first chart), while ignoring the blue line, it made it look like we were heading for a peak.

The second and third contributors could have both caused more cases and more people to be infected in a short window, causing the peaks.

I do not have a high degree of confidence in the above and welcome the poking of holes in it.

Things that make me doubt the idea that this is a steady spreader are the Diamond Princess and the Smithfield meat plant.

Though, both meet the criteria for having a high spread rate (closed and close quarters).

A key piece of info for both is how long it took to get to their infection rates. I haven’t found that data, yet.

2 thoughts on “The big question: When we open will cases grow exponentially?”