The chart below is on one of the CDC’s COVID websites: 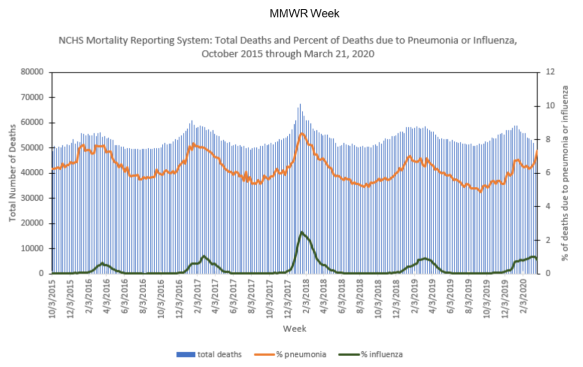 Let me orient you to the chart.

The blue columns are the total number of deaths each week (from any cause) in the U.S. The U.S. averages between 50,000 and 60,000 deaths per week (reference is left-axis).

I think there are a few interesting things about this chart to discuss.

First, how many people know that the U.S. normally has at least 50,000 deaths per week?

My guess is very few. From all the media reports I’ve seen these past few weeks that fixate on C-19 death tolls but don’t reference this number, I would guess just myself and the CDC analyst who made this chart knows it.

The media shouldn’t be the only ones expected to reference this number. To my knowledge, nobody on the Trump response team has mentioned it, nor have I heard any reports at local levels use it to put the magnitude of C19 deaths in perspective in states or cities.

When I tell people, they are surprised. A typical response is, “hmm, I didn’t realize it was that many. I hadn’t thought of that.”

Reporting numbers without context is a way to mislead and manipulate you. This is a trick I’ve seen countless times in corporate boardrooms, often by up-and-coming managers or consultants trying to make their projects look better or a rival’s look worse.

The second thing I find interesting about the chart: the number of deaths peak when the % of deaths from pneumonia and flu peak, which is a convincing visual evidence that those illnesses cause those peaks.

In fact, the CDC estimates 61,000 died from flu or flu-related illness in that season, which is remarkably close to the latest projections for expected deaths for C-19 through August.

The last thing I find interesting on the chart is the direction of the pneumonia and flu lines in February and March of this year (2020): up, sharply. My guess is that was the beginning of C19 and we just didn’t know it at the time.

It will be interesting to see how this chart looks for the next few months. I predict we will see another peak in April followed by a trough.

It will also be the truest gauge we’ll have on how C-19 contributed to total deaths.

If I ran a news show, this is the chart I would have oriented my audience to from the start, so we could all have a better perspective on what’s happening.

To put into perspective, that should end up being 14-17% of the total deaths for the past two weeks.

And, watching this chart will give us the truest gauge to how many of the C-19 deaths were truly C-19 deaths.

We would normally expect 108,000 deaths during these past two weeks.

If total deaths ends up being 126,000, that’s a strong case that the C-19 deaths were counted properly.

If the total is closer to the 108,000 normal expectation, that’s a strong case that they were not.